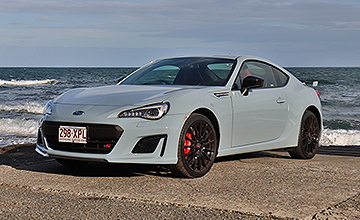 WHILE the Toyota 86 gets all the sales and market recognition, those in the know harbour a preference for Subaru’s version, the BRZ.

In producing the tS flagship tested here, Subaru has further differentiated the BRZ from its 86 sibling with a smattering of handling upgrades (and far too many badges from the shelves of its STI performance division).

But fear not, as the suspension tweaks have resulted in this 2+2 coupe becoming a better daily driver and Subaru’s vastly superior infotainment system – with Apple CarPlay and Android Auto smartphone connectivity – also helps make it that bit more liveable than the Toyota.

Add to this the relative rarity – and therefore exclusivity – of the Subaru-badged version, and our next question is “where do we sign”.