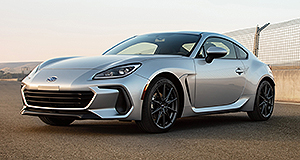 AT LONG last, Subaru has unveiled its new second-generation BRZ coupe, a car that sticks to the first-gen’s basic recipe of being small, light and rear-wheel drive but ups the ante in terms of firepower, now boasting an extra 18kW/37Nm courtesy of a bigger 2.4-litre engine.

Channelled to the back wheels via either a six-speed manual or six-speed automatic transmission, the new BRZ’s new flat-four petrol engine develops 170kW of power and 249Nm of torque, directly addressing the main criticism of the current model.

The engine in question is actually a naturally aspirated version of the force-fed mill found in the overseas Liberty and Outback XTs which has be infused with Toyota’s D-4S direct fuel and port injection system.

While a fair bit bigger in terms of engine capacity, the new BRZ is only marginally larger dimensionally than the current model with 25mm being added to its overall length (4265mm) – 6mm of which can be found in the wheelbase – while its width stays the same at 1775mm.

9mm has been cut from its overall height, meaning the new model stands just 1311mm tall.

When all is said and done, Subaru is claiming the new model’s body to be 50 per cent stiffer than the current model’s while the lower roofline and extensive use of aluminium has also lowered the centre of gravity.

In terms of styling, the new BRZ is a far cry from its predecessor, instead resembling something of a mix between a Ferrari 599 and C7 Chevrolet Corvette, albeit in a much smaller package.

In fact the only real similarities between the current BRZ and the new one is the basic inverted trapezoid shape of the main grille and its subtly flared rear haunches.

At the front we find an almost smiling fascia – expect the new Toyota 86 to flip the trapezoid grille to create a frown – with rounded triangular headlights underlined by simple daytime running light strips.

A darkened integrated front splitter meanwhile adds a quiet sense of purposefulness to the arrangement, as do the black 18-inch 10-spoke alloy wheels – wrapped in Michelin Pilot Sport 4 rubber.

Behind the front wheelarches there is a set of functional air vents which integrate into the generously sculpted side skirts.

The rear end looks like it could have come almost directly off the last of the Holden Insignia VXRs; featuring upsweeping tail-lights mounted right up underneath the lip spoiler, linked by a similar full-width trim piece.

The bumper meanwhile is meaty and defined by a sharp contour line when it intersects the rear wheelarches, flanking the twin exhaust tips which poke through a generously proportioned double-bubble style rear diffuser.

Interior styling has been kept more closely in line with the current model in being simple and driver-focused with the familiar mix of grey cloth and leather upholstery, sports seats, rotary climate controls and a high-mounted infotainment screen.

Local pricing and specification is yet to be detailed by Subaru however some of the global spec highlights include Apple CarPlay and Android Auto, a digital instrument cluster and Subaru Eyesight (automatics only).

“This car gave the whole sports segment a massive shake when it originally launched in 2012 and based on what we know so far about the second generation, we’ve got very high hopes for its ongoing appeal in Australia,” he said.

While the new model’s local arrival is yet to be confirmed, GoAuto understands it should be on track to arrive in the third quarter of 2021.

What this means for the BRZ’s Toyota sibling, the 86, and its arrival Down Under remains to be seen, with previous reports suggesting the Toyota will lob here around the same time as the BRZ, even though the second-generation has not been revealed.

Subaru Australia had sold 297 BRZs as of the end of October, accounting for 6.1 per cent of the sub-$80,000 sportscar segment and marking 10.8 per cent decline compared to the same period last year.