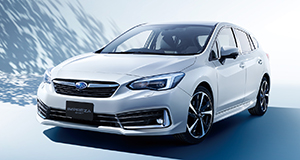 SUBARU has released images and details of a mild mid-life technology and styling update to its Impreza small hatch and sedan in its Japanese domestic market, with the majority of changes likely to carry through to Australian-delivered versions that are expected to arrive in the first quarter of next year.

Technology additions are headlined by the inclusion of Subaru’s latest ‘EyeSight Touring Assist’ suite of camera-based active safety and driver aid systems across the range.

Other gadgetry updates include a new wide-angle front-view camera display plus door mirrors that automatically angle downwards to help avoid kerb crunches while reverse parking and auto-fold when the car is locked.

Subaru Australia national corporate affairs manager David Rowley told GoAuto it was too early to determine local specifications, including whether base Impreza variants will continue to do without EyeSight in Australia when the facelifted version launches.

The front-end look has been softened slightly, with the honeycomb style grille replaced by a more upmarket-looking slatted item. Below is a new one-piece lower grille with LED fog-lights nestled into the elbows of large boomerang-shaped metallic trims.

Apart from that, the notable rear-end change is that Subaru appears to have addressed criticism over the lack of rear parking sensors.

Capping off the styling update are new alloy wheel designs, plus headlights and tail-light clusters that have a crisper finish to their lenses.

It is largely business as usual inside, although the multimedia unit looks slightly slicker and resembles that of the Forester mid-size SUV, while the upper screen has gained a stitched-look padded cowling.

The Impreza’s analogue instruments have been modernised with a classier new design, and it seems some variants will gain a faux carbon-fibre door trim and two-position memory function for the driver’s seat.

Japanese buyers have a choice of 1.6-litre or 2.0-litre four-cylinder Boxer petrol engines, but Australia is likely to stick with just the larger of the two when the refreshed Impreza arrives.

It is not yet clear whether any mechanical changes have been applied or whether the Impreza’s ride and handling has been tweaked for this update.

There is also no word yet on updates to the Impreza-based XV compact crossover, but a similar set of changes is expected on that model in due course.

All Subaru models apart from the Forester experienced a double-digit sales decline to the end of July, which the company attributed at least in part to a production stop earlier this year related to a remedying the supply of faulty power steering pumps.