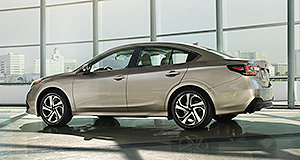 SUBARU unveiled its seventh-generation Liberty mid-size sedan at the Chicago motor show overnight, but a question mark hangs over whether the advanced new model will make it to Australia.

GoAuto understands that the Japanese manufacturer has not committed to right-hand-drive production of the new Liberty – or Legacy as it is known in the United States – and that the slowing rate of sales in the mid-size passenger car segment in Australia and other right-hook markets means its future is now the subject of an internal review.

The Liberty accounted for 1595 sales in Australia last year, down 21.2 per cent on 2017 and a far cry from the circa-6500 units Subaru was shifting 10 years ago – when mainstream mid-size cars accounted for almost 70,000 annual sales and seven per cent of the entire market.

A Subaru Australia spokesperson has told GoAuto that “our current Liberty still has a considerable time to run, and at this stage, we have no information on future timelines”.

Any decision to end right-hand-drive production of the long-running model will come as a blow for Subaru fans and typical Aussie families who want a relatively roomy vehicle without stepping up to an SUV – particularly when the new generation takes a significant step forward.

Promising major advancements in the areas of “technology, performance, safety and refinement”, Subaru’s redesigned Liberty has emerged with an appealing, if still rather conservative, design that is built on the Japanese car-maker’s all-new global platform, which already underpins the latest Forester mid-size SUV and the smaller XV crossover.

Perhaps the biggest news to come out of Chicago this week is the return of a sporting turbo-petrol engine for Liberty in the form of a 2.4-litre boxer engine that delivers 194kW of power (260hp) at 5600rpm and 376Nm of torque from 2000-4800rpm.

Matched to a “high-torque” version of the Lineartronic CVT with manual mode and steering wheel paddle-shifters, the unit can launch the Liberty XT from 0-60mph (96.6km/h) in an estimated 6.1 seconds, Subaru says, while still managing to return city/highway fuel economy of 24/32mpg (9.8/7.3L/100km).

Subaru last offered a turbo-petrol four-cylinder engine in Liberty’s previous fifth generation, when the GT model was fitted with a 184kW/339Nm 2.5-litre engine, and this new one looks as if it will replace the current 191kW/350Nm 3.6-litre six-cylinder boxer engine used in the 3.6R.

Elsewhere on the powertrain front, the Liberty scores a new naturally aspirated 2.5-litre four-cylinder engine with direct injection – as seen on the latest Forester – that produces 136kW and 239Nm and is also paired with a Lineartronic CVT. This is up from the current Liberty 2.5i’s 129kW/235Nm.

Dynamic performance is said to have improved with a fully revised suspension that is “lighter, stronger and more responsive” and comprises MacPherson struts up front and a double-wishbone layout at the rear.

Bigger brakes on 17- or 18-inch wheels, combined with the stiffer new platform and lower centre of gravity, also contribute to what Subaru is calling the most sophisticated and advanced Liberty in the model’s 30-year history.

The higher-tech positioning of the new model is immediately apparent in the redesigned cabin, where a tablet-style 11.6-inch full-HD touchscreen multimedia display – billed as “the largest, most advanced infotainment screen ever in a Subaru” – dominates the central dash area.

A wide range of connectivity options, including WiFi for the first time on Liberty, is also noted, along with a large multilayer instrument panel, high-grade Harman Kardon audio options and, underpinning all of this, upmarket interior detailing – on high-spec versions, at least – via the heavy application of soft-touch surface material, Nappa leather upholstery, double-stitching on carefully colour-matched trim, and so on.

This is a quieter cabin, too, with Subaru claiming to have reduced road noise by almost 3dB at highway speeds, owing to various new sound-insulation measures relating to the door panels and glass areas, for example.

Interior room also goes up a notch, with increases in front shoulder room, front and rear hip room and rear legroom, while boot space increases with an extra 36mm in cargo floor length.