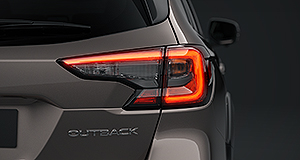 SUBARU Australia has given us our first glimpse of the new sixth-generation Outback large wagon/SUV, due to land Down Under in March next year riding on an all-new platform and loaded with more standard safety kit than ever before.

Set to be underpinned by the Subaru Global Platform, the new Outback will arrive here available with just the single engine option, that being “a refined” 2.5-litre flat four-cylinder petrol engine however specific details have not yet been revealed.

This news in particular cements Subaru’s shift away from diesel powertrains with the current fifth-gen Outback being the only model still available with an oil burner.

Likewise, the 3.6-litre flat six-cylinder petrol engine utilised in the aptly named 3.6R flagship is also going to be discontinued with a further blow dealt by the revelation the 194kW/370Nm turbocharged 2.4-litre four-cylinder designed to supersede the flat-six overseas will not be offered locally.

“However, as demonstrated by new-generation Forester, which initially launched with one engine option, there is significant sales potential with new-generation Subarus where factors including safety, practicality, durability, engineering and whole-of-life costs are significant considerations.”

Despite the lack of diesel or a high-powered variant, Subaru says the new model will feature a 2000kg maximum braked towing capacity, a record for the nameplate.

Not much has been given away yet in terms of styling or standard equipment other than a tail-light cluster that looks very similar to those found on the current Forester and a vertically-oriented infotainment touchscreen surrounded by haptic climate control buttons.

According to Subaru, the Australian-delivered Outbacks will boast their own unique specification levels and rise to a “new level of interior refinement and luxury”.

Subaru Australia general manager Blair Read said the new Outback would continue to set the standard for safety and driveability.

“This will appeal to both loyal Subaru customers and newcomers, who are increasingly

aware of the compelling whole-of-life value that Subaru ownership represents.”

Subaru has sold 4499 examples of the current Outback so far this year ending November, accounting for a respectable 5.5 per cent of the crowded sub-$70,000 large SUV segment.