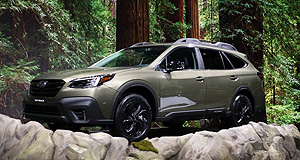 SUBARU Australia will put its faith in the all-new Outback crossover wagon to carry the company’s fortunes in the mid-sized vehicle market, with the related Liberty sedan set to be phased out locally due to shrinking sales of passenger cars, particularly the medium variety.

The new sixth-generation Outback – unveiled overnight at the New York motor show – is expected to arrive in Australia in late 2020 or early 2021, replacing the current model that has done duty since late 2014.

Subaru Australia has not committed to the latest Liberty that was unveiled in its North American Legacy guise at the recent Chicago motor show.

The company declined to comment when asked about the future of the sedan which has achieved just 298 sales so far this year – down 31.2 per cent – compared with the Outback’s 2174 units.

Although the Liberty is expected to soldier on for some time yet, the apparent decision to bring its run to an end in Australia is almost solely due to the market switch to SUVs and crossover vehicles.

The Outback – the fourth best-seller in the large SUV class – is one of Subaru Australia’s top sellers, behind the Forester and in front of the compact XV.

The new Liberty and Outback are both built on Subaru’s new global platform that already underpins the Impreza, Forester and XV. This architecture is said to have a 70 per cent improvement in torsional rigidity for better handling and a quieter and more supple ride.

Cabin noise levels are claimed to be improved by 3dB at highway speeds, partly due to the new platform but also because of a range of other measures including improved door weather strips and noise-deadening glass.

Crash protection is also up, with Subaru predicting the Outback will get a top safety pick rating in the US when it goes on sale there in the third quarter of this year – more than a year ahead of Australia which will source its right-hand-drive range from Japan.

As expected, the current Outback’s 3.6R flagship’s 190kW/350Nm 3.6-litre flat-six petrol engine will be axed, replaced by a new 194kW/376Nm 2.4-litre turbocharged boxer engine at the top of the range.

This turbo unit – a first for Outback in Australia – is claimed to propel the Outback from standstill to 60 miles per hour (96.6km/h) in 6.1 seconds.

The current diesel engine is also set for the chop, with a 2.5-litre normally aspirated four-cylinder petrol engine the only choice in lower variants.

This engine sounds familiar, but Subaru says more than 90 per cent of the parts are new. These include direct injection that helps to lift power and torque from 129kW and 235Nm to 136kW and 239Nm.

All engines will be hooked up to Subaru’s continuously variable transmission (CVT) and symmetrical all-wheel-drive system with active torque vectoring and an improved X-Mode off-road setting with hill descent control.

The new suspension – MacPherson struts up front and double wishbones down back – is said to be lighter and more responsive than before. Ride height has been lifted to 220mm, but Subaru claims access remains at a comfortable height.

Speaking of access, the rear hatch can now be opened with a wave in front of the Subaru badge, while the cargo cover can be dispatched with one hand.

With the rear seats folded, items almost two metres long can be stowed in an area that can now swallow more than 2000 litres of cargo.

The rear seat is now more spacious, with rear head, shoulder and leg room enlarged, while USB ports have been increased to four.

For the first time, Outback gets a forward view camera, beaming a 180-degree image of the way ahead on to the vehicle’s tablet-style 11.6-inch touchscreen – a handy addition when, for example, cresting a steep hill in the bush.

In a segment first, the Outback gets a driver distraction warning system that employs an infrared camera and facial recognition technology to identify signs of driver fatigue or distraction, thus setting off a warning signal.

Subaru’s latest Starlink connectivity will be standard on the vertically mounted touchscreen.