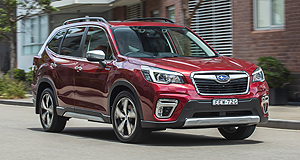 SUBARU Australia is encouraged by a strong customer response to the arrival of its first-ever hybrid powertrains, with the two-pronged petrol-electric Forester medium SUV range touching down locally priced from $39,990 plus on-road costs.

With the green Forester twins joined by a single XV hybrid small SUV (from $35,580), the new fuel-saving options have attracted a significant level of interest from the Japanese brand’s Australian customer base.

According to Subaru, nearly 5000 expressions of interest have been placed by customers since the reveal of the hybrids in December, while the wait list for both model lines has now stretched out to April.

The company says supply for the electrified models will be restricted to around 150 to 200 units per month, with a skew towards Forester which has two variants as opposed to one – the mid-spec L and the more premium S. The latter raises the asking price by $6000, to $45,990 plus on-roads.

Subaru Australia managing director Colin Christie said the decision to go with a two-variant Forester hybrid range was to ensure the new technology was accessible to as broad a range of customers as possible.

“I think having the two trim variants which are both highly equipped and specced, it’s important to give people (choice),” he said.

“What we didn’t want to do was tell people you can only access a hybrid if you want the top-of-the-line variant.

“And even with XV we’ve only got one variant but it’s in the middle of our model walk, because we wanted to make sure it’s accessible for people.”

Of course, the headline act for the Forester hybrid is its powertrain, namely a 2.0-litre normally aspirated four-cylinder ‘boxer’ petrol engine good for 110kW at 6000rpm and 196Nm at 4000rpm, teamed to a self-charging synchronous electric motor producing 12kW/66Nm.

Pure EV is used at low speeds of up to 40km/h, while at medium speeds the petrol and electric power work together.

The boxer engine takes over sole duties when travelling at high speeds, however in certain situations above 40km/h the electric motor can be used when coasting or decelerating.

Subaru has maintained its trademark symmetrical all-wheel-drive system and endeavoured to optimise front and rear weight distribution with the hybrid hardware.

All electric motor components including the drive motor inverter and DC/DC converter are stored in a high-strength frame with the motor located near the car’s centre of gravity and the battery and other components above the rear axle.

The boxer petrol engine is mated to a continuously variable transmission, with power being sent to all four wheels as with the rest of Subaru’s model line-up (with the exception of the BRZ).

Along with the standard five-year/unlimited-kilometre warranty, Forester hybrids come with an eight-year/160,000km lithium-ion battery warranty.

The inclusion of the battery pack has meant the spare tyre has been removed, leaving only a tyre repair kit.

The Forester hybrid will compete with the Toyota RAV4 which also offers self-charging hybrid variants that range from $35,490 to $44,990.