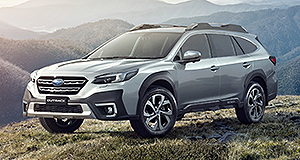 TWO months out from its Australian launch, Subaru has revealed the local pricing and specification highlights of its new sixth-generation Outback large SUV with the high-riding wagon moving decidedly up-market.

Now riding on the ‘Subaru Global Platform’, the sixth-gen Outback will start from $39,990 plus on-road costs – marking an entry price increase of $2550 – when it arrives here in March and top out at $47,790 before options.

Described by the brand as being “90 per cent new”, the engine is an evolution of the familiar 2.5-litre powerplant as seen in the current model albeit with around seven per cent more power and four per cent more torque, equating to peak outputs of 138kW/245Nm.

Fans holding their breath for the return of a high-output or diesel mill needn’t do so, with Subaru Australia national corporate affairs manager David Rowley previously revealing to GoAuto that neither option was on the cards for Australia due to factory availabilities and the marque’s portfolio-wide move away from diesel powertrains.

Despite this however, the new model brandishes a best-ever braked towing capacity of 2000kg, enough to put it on even terms with bigger, seven-seat vehicles like the Kia Sorento.

As usual drive is sent to all four wheels via a revised continuously variable transmission (CVT) with all versions scoring paddle shifters and a subsequent eight-speed manual mode – up from seven.

This extra “ratio coverage” not only aids performance when used in conjunction with the increased power and torque, but also reportedly enhances fuel economy, however Subaru Australia is yet to reveal any concrete details in either regard.

With an all-new platform and heavily reworked drivetrain, Subaru Australia has made the conscious decision to push the Outback further upmarket and adorn the range with plenty of standard kit and safety features to further justify the admittedly modest starting price increase.

Creature comforts and safety tech both on the base model and across the range include a vertically oriented 11.6-inch touchscreen infotainment system, the latest version of the Subaru Eyesight driver assistance system and vision assist, driver monitoring and auto stop-start system.

Joining the Eyesight and vision assist systems on the safety front is a new passenger seat cushion airbag designed to push the front of the seat up in the event of a frontal impact to “prevent the body from sinking below the seatbelt and improve the restraint protection performance, helping to reduce chest injuries” and minimise leg contact with the dashboard.

At the top of the range, the Touring AWD doesn’t brandish the same black exterior highlights as the Sport but it does boast all of the other toys as well as nine Harman Kardon speakers for the audio system which also includes a CD player, Nappa leather accented seat trim, electric sunroof, heated steering wheel, silver roof rails with integrated stowable cross bars and gloss alloy wheels.

According to Subaru Australia general manager Blair Read, this new push upmarket comes in response to customer feedback and cements the Outback as the flagship of the brand’s current portfolio.

Mr Rowley meanwhile added that the new variant naming model was likely to be expanded to the rest of the brand’s line-up over time and as models evolve.

“Certainly we’re considering model name, grade and AWD as a consistent theme from hereon and it’s something that could evolve with the passing of model years and generations,” he said.