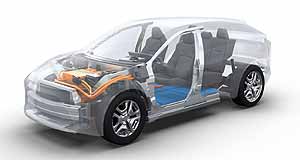 SUBARU’S European arm has announced it is preparing for the launch of an all-electric SUV, which will mark the first zero-emissions offering from the Japanese brand.

Little is known about the upcoming EV, other than it will be a mid-sized SUV similar in size to the Forester, and will be built on a platform shared by Toyota.

The platform is the result of the strategic partnership first announced in June 2019, when Toyota and Subaru announced they would collaborate on developing a battery electric vehicle platform (called e-TNGA by Toyota) and C-segment SUV.

Toyota would contribute its vehicle electrification technologies, while Subaru would bring its all-wheel-drive expertise to the table.

The as-yet-unnamed SUV is scheduled to be introduced to the European market in “the first half of the 2020s”, with additional information to be shared sometime next year.

When asked about the possibility of a local introduction, Subaru Australia national corporate affairs manager David Rowley said there was no new information to share, but the company’s local arm would be interested if the vehicle were to become available.

“We’re always excited to see new developments from Subaru in Japan,” he said. “At this stage, we understand there are no plans for this vehicle to be launched outside European markets.

“However, we are always talking to the factory about future options, though there is no definite timeline in this instance.”

Details such as battery size, driving range and power output are yet to be disclosed, however it is possible the Subaru SUV will be underpinned by Toyota’s forthcoming solid state battery technology.

The solid state batteries are said to be capable of a full recharge in just 10 minutes, which could prove revolutionary for the industry if Toyota’s engineers have indeed cracked the code.

Toyota has also announced an all-electric SUV, set to be revealed at some point next year.

Subaru Australia only began to dip its toes into the world of electrification early this year, with the release of the mild-hybrid Forester and XV e-Boxer variants in February.

The Forester has been the brand’s best seller with 10,820 units ahead of the XV and Outback, the latter of which is due to arrive in all-new sixth-generation form next year.