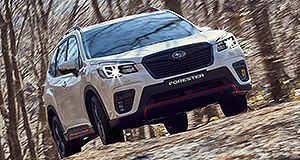 SUBARU Australia has hinted the new-generation BRZ, WRX and WRX STI performance halos will not be alone for long when they begin to arrive in showrooms later this year and early 2022 with local executives suggesting a hot Forester may also be on the cards, as well as a reimagined Levorg and a force-fed Outback.

Speaking exclusively to GoAuto at the virtual launch of the new sixth-generation Outback, Subaru Australia general manager Blair Read said there was some product in the pipeline away from the established performance halos that would “reinvigorate” fans’ passion for the brand, especially in the performance SUV segment.

“We absolutely love the passion that exists for the brand and I think maybe we’ll circle back in about six to nine months,” he said.

“I think what you’ll see coming will reinvigorate some of that passion and will show the Subaru-passionate people that Subaru is definitely in that space.

“We don’t think it’s lost, and we think there’s some really exciting stuff coming which will really appeal to people who are Subaru loyalists at heart, but also to a whole new generation of Subaru lovers.”

Die-hard Subaru fans were left disheartened last year when the brand launched the naturally aspirated Forester 2.5i Sport, lamenting the omission of forced-induction.

For reference, the brand has not offered a performance-focused Forester since 2018 with the demise of the fourth-generation family hauler.

With a mid-life facelift for the Forester due to arrive Down Under later this year, the stage is set for the rebirth of a dedicated performance version, especially given other brands like Hyundai and Ford are capitalising on its absence with the upcoming and recent releases of their respective Tucson N-Line and Escape ST-Line.

As droves of Forester fans now wait with bated breath, Subaru Australia national corporate affairs manager David Rowley also revealed the mid-sized Levorg wagon would be morphing “into something slightly different in our market” compared to the Japanese versions.

“As a performance enthusiast, you won’t be disappointed … I would perhaps refer to it as a ‘turbocharged performance wagon’, not necessarily as ‘Levorg’.”

Reading between the lines, we expect the next Levorg to arrive in Australia essentially as a WRX wagon – perhaps even wearing the WRX nameplate – reviving the classic dual body style line-up that has been offered in every previous generation WRX, save for the current fourth-gen which is sedan only.

More fuel is added to the fire when it comes to the styling of the two models with the next-gen WRX expected to borrow heavily from the JDM Levorg’s catalogue of visual cues, fitting nicely with Mr Rowley’s comments of the Australian cars looking “slightly different”.

The current Levorg launched in Australia in 2016 as a semi-successor to the extinct Liberty wagon while also providing customers with a bigger, slightly softer and more practical alternative to the focused WRX.

Sales Down Under have not been overly fruitful however with the Rex-based wagon being outsold three times over by the Liberty in 2020 with just 306 units sold nationwide.

Reinventing the new model as a dedicated WRX wagon however could prove fruitful for Subaru given the hatch body style made up 36 per cent of all third-gen WRX sales and 56 per cent of STI sales (third-gen).

The good news keeps on coming too with the revelation that while it is not offered from launch, Subaru Australia is pursuing the local introduction of the 194kW/376Nm force-fed 2.4-litre Boxer engine for the new sixth-generation Outback SUV – the same mill earmarked for the new WRX.

According to Mr Read, there has been plenty of “feedback from customers” in support of offering the uprated powertrain with Mr Rowley adding the local subsidiary is “certainly interested” in securing it here.

“It’s not currently an option from the factory, but something we continue to pursue and discuss,” Mr Read said.

For the time being then the new Outback is only being offered with a heavily reworked version of the familiar 2.5-litre flat four-cylinder petrol engine good for 138kW/245Nm with the high-output engine available in other markets as a replacement for the now defunct 3.6R.