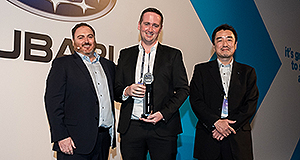 Led by dealer principal Wayne Robertson, the Traralgon dealership is part of the large multi-franchise Gippsland Motor Group and the national award for its outstanding performance last year came in conjunction with the Southern Region ROTY award.

In presenting the award alongside Subaru Corporation’s general manager for overseas sales and marketing Makoto Inoue, Subaru Australia managing director Colin Christie said: “With retailers like this in our network, the benchmark has been firmly set.”

The Traralgon dealership was quick to take to social media to thank “our loyal customers and our dedicated team of Subaru enthusiasts” and admit that “we are truly blown away to have won two prestigious awards and so proud of what we have been able to achieve”.

Three dealerships were also singled out for implementing “exceptional initiatives” that embody Subaru’s ‘do’ mantra and the brand’s core values of imagination, spirit and quality.

Perth City Subaru was the recipient of the Imagination Award, with dealer principal John Nossiter and his team developing ‘How it Works’ videos for broadcast across internet and social media channels based on common questions and requests for information from their customers.

The Spirit Award went to Brisbane’s Llewellyn Subaru, which recognised Wade Llewellyn and his team’s development of “a cohesive community building program which makes their name synonymous with their city and district, keeping the spirit of community and family alive and making them a respected pillar of that community”.

McGrath Subaru Liverpool in Sydney’s west was presented with the Quality Award based on the outstanding effort put in by Greg Hook and every other staff member involved in delivering the one-millionth Subaru vehicle sold in Australia, which went far beyond a simple handover.

Subaru Australia also recognised dealerships that met the criteria for its ‘1000 Club’ which is based on expanding the brand’s owner base with at least 1000 new members. The 2019 entrants were Perth City Subaru, Suttons Subaru Rosebery, Jarvis Subaru (Adelaide), Subaru Parramatta, McGrath Subaru Liverpool and Subaru Docklands in Melbourne.