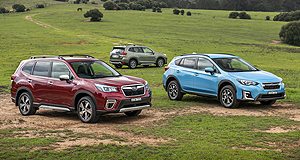 SUBARU Australia is working to recover lost ground and has forecast a return to sales growth after a torrid year marred by production issues that saw it shed 10,000 units and finish with just 40,000 new-vehicle registrations in 2019 – down 20 per cent on the previous year and its lowest annual result since 2011.

Speaking to GoAuto at the launch of the Forester and XV hybrid models last week – the Japanese brand’s first foray into electrified vehicles in this market – Subaru Australia managing director Colin Christie said the local operation was on the back foot from the start of last year.

“We had a pretty big production challenge when the factory was shut down right at the start of the year, we had a big order in that month and we never recovered from a stock point of view,” he said.

“We then lost more cars in the typhoons that happened in Q3 and then even in December we had cars on boats that were delayed or turned around because of stinkbug.

“We’ve now got around a month’s worth of orders sitting in an order bank that we’re just trying to get cars in. Even in January it was the same impact.”

Mr Christie said he expects Subaru to remain in catch-up mode during 2020, with stock limitations on key models – including the new hybrids – continuing to hurt the bottom line, but he is confident of stemming the flow of negative returns.

“At the moment I think production looks like it’s freeing up a lot better this year,” he said.

“Our overall application that we expect to get this year is still limited compared to what we think we can deliver from a sales point of view, but we don’t foresee any major production issues at this point in time.

“So we’ve had our share of challenges getting cars into market, we would expect the flow to be better this year than last year. So we do expect to see some growth on last year.”

The impact of the deepening coronavirus crisis remains a threat for Subaru as it does for many other manufacturers and their Australian subsidiaries, and Mr Christie said his team was “working very closely with Subaru Corporation on a weekly basis (but) at this stage there’s been no communication on any impact or issues for us”.

He was also buoyed by the strong market response to Subaru Australia’s first hybrids, which mark the beginning of its electrification push that will ramp up throughout the decade.

Demand is easily outstripping supply, with private stock of the hybrids sold out until May – the first batch drawn from a list of some 5000 expressions of interest – and 500 fleet sales also in the bank.

Local allocation leads Mr Christie to expect up to 200 sales per month of the XV/Forester hybrids combined – a healthy 2400 units for the year – and the models should be a solid long-term proposition given they bring new technology to the brand while still retaining key selling points such as the horizontally opposed boxer engine and symmetrical all-wheel drive.

Asked whether the ‘e-Boxer’ hybrids marked a significant milestone for Subaru, Mr Christie said: “I think it is, I think it’s a huge step forward for us as a brand.

“We’ve got so many things that the Subaru brand is known for and renowned for – symmetrical all-wheel drive, boxer engine, EyeSight, X-Mode and all these fantastic technologies, and the ability to bring all of them to market with the addition of a hybrid and not sacrificing any of those things, I think it’s massive for us.

“Our volume will be limited for us as I said, but I think in terms of how people start to perceive Subaru, we’re now taking that step forward into the next generation, that’s really important.”

Subaru has arrived relatively late to the party with its hybrid offerings, but Mr Christie said the brand was comfortable with its timing given that Toyota – its technology partner – had helped to spearhead a surge in hybrid popularity.

“I think it’s the perfect time for the brand, the success we saw from the Forester when we launched Forester, (we saw a) 50 per cent increase in our product 18 months ago,” he said.

“I think it was a great opportunity for that car to stand on its own, XV has continued to be really strong, and I think we rolled into hybrids at the right time and at the end of this year we roll into new Outback, so in terms of really strong messaging about how we’re progressing as a brand it was really important.

“And to be honest, the other one is Toyota – I think the launch of the RAV4 has changed the thinking around what a hybrid can be.”

Subaru Australia is yet to confirm other hybrid variants, however the Impreza small car is a top contender given it has just received an update for the 2020 model year and will offer a hybrid variant in other markets.

The Outback large wagon, which is set to arrive locally in new-generation guise in the fourth quarter, is also on the cards for electrification.

“Get it into market in our two biggest models, probably the two most logical models at the moment in terms of hybrid opportunities, and then let’s learn and see what happens, and understand the experience and the process much better, and then we’d love to expand the hybrid range with Subaru moving forward.”

Subaru also sells plug-in hybrid versions of the Forester and XV overseas, but Mr Christie indicated that the Australian operation would be more likely to bypass PHEVs and move straight to full-electric vehicles, which are due around 2022 using technology co-developed with Toyota.

“To be honest we have no plan to bring plug-in hybrid to our market at this stage. This is our first foray in, let’s understand it,” he said.

“For us, depending on the speed of movement we might end up going from hybrid straight into electric vehicles.”

Subaru Corporation plans to have 40 per cent of its sales made up of electrified powertrains by 2030, and while Mr Christie said our market was unlikely to have set targets and that production was subject to international demand, he conceded that Australia will be “on the same page as them in terms of getting to that sort of number”.