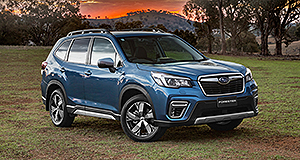 SUBARU Australia says its sales performance this year has been “actually pretty good”, revealing that the fallout from the production stop which derailed its stock levels has subsided, opening up the possibility of it rebounding in the second half of 2019.

Speaking last week in an exclusive interview with GoAuto, Subaru Australia managing director Colin Christie said “our production was significantly reduced” from the outset this year due to a production stop in Japan prompted by a defective electric power steering (EPS) part.

The issue affected MY19 examples of the Forester mid-size SUV, XV small SUV and Impreza small car, with the production stop at the Gunma plant starting on January 16 and lasting for about two weeks. For reference, no vehicles sold Down Under were impacted.

Despite the defect being concentrated to the trio, Subaru halted all of its Japanese assembly lines for a fortnight, meaning that the Liberty mid-size sedan, Levorg mid-size wagon, WRX small car and BRZ sportscar were also unavailable for export to Australia.

“There were obviously production shortages in the first place, so May was really the first month we actually started getting more normalised rates of stock back into the country,” he said.

“There was a massive backlog of getting production in, so even when the production started again, the speed on line was much slower because they obviously were trying to produce replacements units as well as to keep the line going.

“We effectively lost – in real terms – over a month of production … (and) that (slow production) probably rolled on for about two to three months.

“So, that basically (impacted) all the way through from January to April – that’s been the biggest factor by a long way, in terms of our sales result.

“Our orders are naturally small in the first part of the year, so that then made an even bigger impact. It really has taken has three to four months to recover.

“June certainly is feeling a lot better than we’ve seen for the first four months of the year.”

To the end of April this year, Subaru Australia’s sales were down by a massive 33.8 per cent – easily the largest loss incurred among the top-15 brands in a new-vehicle market that was down by 8.1 per cent during the same period.

But May signalled a return to form for the company, with its volume growing for the first time in 2019, albeit by just 0.1 per cent.

Either way, this result was enough to slow the bleeding, with it now standing at a 27.4 per cent loss and 15,518 units sold in the year to date.

Mr Christie said he expects regular levels of supply to be available for the rest of 2019, which “allows us to get back on track”.

“Demand from customers has been strong, we’re very happy with it,” he said. “We just haven’t been able to get the cars into the country and into customers’ hands as quickly as we would like.”

Mr Christie added that even Forester (5192 units, +24.0% YTD), which is Subaru Australia’s only model to experience growth in 2019 thanks to the launch of a new-generation model in September last year, has not been able to fully hit its stride yet.

“While it’s been a really strong start to Forester, it’s also been hindered a lot by the production challenges. They definitely affected new-model Forester, Impreza and XV the most,” he said.

“But our biggest challenge was certainly Forester. So, while we’re still up 24.0 per cent on Forester volume, the reality is the order momentum for that is significantly stronger.

“We just haven’t been able to get back on top of the production yet to meet all those customer demands.”

“I think the Impreza has had a major impact because of that, as well,” he said. “But as we know, the small-car segment is a little more challenging than it has been historically.

“So, we have seen a little bit of a drop-off in demand but nowhere near what is being shown at the moment – a lot of that has literally been the inability to get cars.”

Overall, Mr Christie was confident that “we’ll see a lot of the product rebound over the next few months”, although he has “not set a firm target for this year” because of the production stop making it “a month-to-month proposition”.

“We’re obviously expecting the back half of the year to be a lot stronger than what we’ve seen so far,” he said.

“Even though production is normalised now, the ability to catch up large chunks of the volume we have missed is going to be pretty hard, because production will remain limited (to a set point) throughout the whole year.

“At this stage, we haven’t set ourselves a target. We’re working with the factory every month to work out how many cars we’re going to get into the country.”

Asked if Subaru Australia is eyeing off a return to the top 10, Mr Christie said “we don’t have any specific targets”.

“Our focus is getting the right product in the market as soon as we can to meet the demand of the customers,” he said. “It’s very much about going back to the basics.”

Moving into 2020, Subaru Australia’s sales will likely be bolstered by the release of the new-generation Outback large SUV, with the current model consistently one of its podium performers. It has sold 3650 units for a 19.6 per cent decrease in the year to date.

In what will be Subaru Australia’s first venture down the electrification path, next year will also see the release of mild-hybrid versions of XV and Forester, dubbed e-Boxer, in the first quarter.

Mr Christie could not be drawn on specific timing for the fresh Outback and was not able to provide line-up details for it and the e-Boxer pair, including whether or not the high-riding wagon will spell the end of diesel engines in Subaru Australia’s model range.

However, a sales downturn could be prompted in 2020 by the likely discontinuation of Liberty (436 units, -40.2%), which Mr Christie described as “an interesting one” due to the recent struggles of the sub-$60,000 segment it plays in. Its new model was revealed in February.

“At this stage, we haven’t confirmed exactly with Japan what we’re going to go,” he said. “Japan is still working through what they’re going to do out of their Japanese factory, which is where the bulk of the right-hand-drive-market (vehicles) is produced from.”

Although Levorg (88 units, -76.6%) would likely face the same scrutiny because it competes in the same segment as Liberty, Mr Christie said that it is treated differently because it “is a unique proposition in the marketplace”.

“There’s been no discussions whatsoever about Levorg at this stage. It supports our performance range,” he said.

While Mr Christie reiterated that new-generation versions of the WRX small sedan (418 units, -57.5%) and BRZ (142, -59.0%) are on the way, he was unable to confirm when they will be revealed and available to purchase, other than to say “it will be a while”.