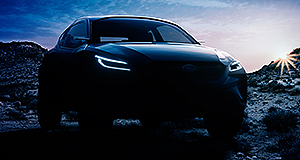 SUBARU has confirmed it will reveal its seventh Viziv concept at the Geneva motor show next month, releasing a single teaser image that suggests the aptly named Adrenaline has off-road intentions.

Set to be fully revealed at 8.45pm on Tuesday, March 5 (AEST), the Viziv Adrenaline is likely to preview a future production model from the Japanese brand, possibly the seventh-generation Outback large SUV due in Australia as early as next year.

This would make sense given the darkened frontal image portrays the Viziv Adrenaline sitting comfortably on top of dirt and rocks – the sort of terrain to which the Outback is, as its name suggests, no real stranger.

However, the Outback has historically been a higher-riding wagon version of the Liberty mid-size car, while the Viziv Adrenaline appears to have greater ground clearance and a faster roofline.

In fact, the Viziv Adrenaline’s small rear side windows indicate that it might only have front doors, which would mean it is unlike any model in Subaru’s current line-up.

Either way, 3D-style LED headlights with integrated C-shaped daytime running lights are guaranteed alongside side-view cameras that are in lieu of traditional wing mirrors – a concept signature.

While the next-generation Liberty is yet to be confirmed for Australia in its seventh-generation form revealed earlier this month, the upcoming Outback’s business case is almost a lock due to the growing local appetite for SUVs.

Subaru has confirmed its presence at the Geneva motor show will also be strengthened by the debut of its European-market e-Boxer hybrid powertrains in two existing models, which are likely to be the small XV and mid-size Forester SUVs.

As reported, Subaru Australia is looking to launch e-Boxer versions of the XV and Forester, with one expected to arrive by the end of this year, while the other is scheduled to go on sale in early 2020.