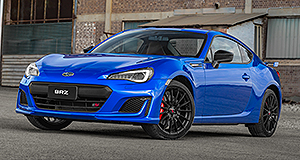 SUBARU may have inadvertently revealed and perhaps even confirmed a fairly major detail of the next generation BRZ/ Toyota 86 sportscar – that it will have forced induction, more specifically, a turbo.

A graphic on Subaru’s global website revealed the Japanese brand was working on a “new downsized turbo engine” and indicated the new power plant could be with us by the end of the year.

The engine in question is an all new turbocharged 1.8-litre ‘lean-burn’ flat-four unit, which according to Subaru, is destined to do service in the next generation, JDM Levorg due to launch later this year.

Subaru Japan executives would not reveal any other details of the new engine, let alone possible ties to the BRZ.

“Next-generation Subaru BRZ is under development (joint development with Toyota),” a spokesperson told GoAuto. “We cannot tell more than that.”

Even the release date of the next-generation coupe is being kept closely under wraps, though Japanese publication Best Car reported last year a launch was slated for the first half of 2021.

“We cannot tell the timing,” the spokesperson said.

The world’s motoring press was sent into a frenzy last week after reports emerged speculating the coupe twins could be powered by Subaru’s current turbocharged 2.4-litre flat four engine, producing 194kW of power and 374Nm of torque in the overseas Legacy and Outback XTs.

GoAuto reported at the time that if the BRZ/86 did score the 2.4-litre turbo, they would actually out-muscle the recently launched four-cylinder Toyota Supra by 4kW and only trail on torque by 26Nm – perhaps a little too close for comfort for Toyota, hence that variant is not coming to Australia.

In that report, Toyota Australia senior public affairs specialist Orlando Rodriguez said 86 fans had been asking for more power, but not at the cost of the current car’s dynamics.

The current 2.0-litre flat-four engine produces 152kW/212Nm in manual guise, but a wealth of aftermarket turbo and supercharger kits have become available and found popularity in recent years, upping the power in some cases by more than 80kW.

While Subaru is remaining tight lipped on the new lean-burn engine, the 1.6-litre and 2.0-litre turbo units in the current Levorg produce 125kW/250Nm and 197kW/350Nm respectively.

Last year Subaru sold 399 BRZs in Australia, while Toyota did marginally better shifting 568 units, accounting for a combined 13.6 per cent of the sub-$80,000 sportscar market – both more than 40 per cent down on 2018.