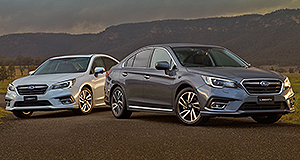 THE ongoing SUV onslaught has claimed one of its biggest and most iconic passenger car scalps to date, with Subaru Australia announcing this week that its Liberty mid-sized sedan will be axed after 31 years of service.

With only 2441 units sold over the past two years, the Liberty was outsold more than five times over by the closely related Outback SUV and according to the latest round of VFacts figures, that trend has continued in 2020.

As of the end of August, 573 new Libertys had found homes in Australia compared to the 3104 Outbacks that were shifted over the same period.

In fact only the niche WRX-based Levorg wagon (230) and BRZ coupe (216) have performed worse than the Liberty this year, however Subaru insists they are niches worth occupying.

Despite the slow sales, those 573 deliveries account for 8.0 per cent of the total sub-$60,000 medium car market, a stark indication of the segment’s shrinking popularity.

The other definitive nail in the coffin for the iconic mid-sizer is the fact the Outback is not even Subaru’s best-selling vehicle this year – that mantra belongs to the Forester with 7436 units sold so far in 2020.

In total, Subaru has notched up more than 153,700 Liberty sales in Australia across the six generations to have been offered here with each generation offering their own distinct character.

“While customer preferences have moved on to other vehicles in our range, Liberty has played a hugely influential role in the brand’s growth and reputation for engineering, safety, durability and retained value.

“It was our first model with global appeal and moved the brand away from its utilitarian roots to becoming a respected automotive company.”

Despite the somewhat cult following amassed by the various generation cars, Mr Dinsdale assured both prospective and returning customers that Subaru still had and would continue to offer sedans.

“For those customers still seeking a Subaru sedan, we remind them that current generation Impreza closely mimics the physical size of third-generation Liberty sedan and, of course, offers the same symmetrical all-wheel drive attributes.

“Equally, WRX is a performance sedan option that is probably the closest relative to the various turbocharged Liberty variants, such as the RS, GT and tuned by STI, which captured the hearts of so many enthusiastic drivers in their heyday.”

A turbocharger was one of the Liberty’s defining features (in the higher grades) when it debuted in 1989, a trait it would keep right up until the six-cylinder 3.6R replaced the GT as the range flagship in 2015 with the launch of the sixth generation.

Up until then, the six-cylinder R variants had always sat one step below the turbocharged GTs (fourth and fifth generation), carrying a more luxury biased image rather than all-out performance.

According to Subaru Australia national corporate affairs manager David Rowley, the move was the result of shifting customer preferences as demand rose for the bigger engine and turbo fans started to opt more for the smaller and lighter WRX.

In February of last year, Subaru unveiled its seventh-generation Liberty (Legacy overseas) at the Chicago Motor Show which also marked the return of a turbocharged engine in the flagship XT model.

Due to the previously mentioned slow sales, the seventh-gen car was reportedly never really deemed a viable option for the Australian market.

At this stage the Liberty looks set to remain in showrooms until early 2021 with one final production order being fulfilled before the curtains close on the Liberty’s time Down Under.