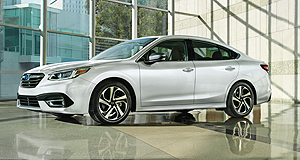 THE future of Subaru’s Liberty sedan remains in doubt as the faltering medium passenger car segment forces the Japanese brand’s Australian operations to question whether to bring the new-generation version Down Under.

Revealed in February last year, the seventh-generation Liberty would likely arrive in the fourth quarter of the year if it does come to Australia, around the same time as the new Outback wagon.

Speaking to GoAuto at the launch of the Forester and XV hybrids last week, Subaru Australia managing director Colin Christie said the company had not yet made a final decision on the Liberty’s fate in Australia.

“We’ve probably got to make the decision in the next three to four months about that car,” he said.

“We’re really focused on Outback, we think Outback is obviously going to be the big opportunity for us and you’ve seen the car in the States – while ours will be different, it’s a different car built on a different production line – the car is amazing, and the quality and the technology of the car is just another massive leap forward.

“So Outback is our focus for now; the medium car segment is tough. Liberty is a fantastic car, but we have to do some pretty hard thinking about what we’re going to do with that car, to be honest.”

Liberty sales fell 15.7 per cent across the year, however the model line still contributes valuable volume to the Subaru brand with 1344 units sold.

Subaru Australia has locked in the related Outback soft-roader wagon, which attracts a similar buyer demographic to the Liberty with the added space of a wagon and increased capabilities off the blacktop.

Like the all-new Outback, the Liberty will feature a new 2.4-litre turbocharged four-cylinder engine good for 194kW/376Nm, replacing the 3.6-litre flat six in the outgoing generation.

A 136kW/239Nm 2.5-litre normally aspirated four-cylinder will also be offered, paired with a continuously variable transmission.

The new model also takes a step up in technology with the fitment of an 11.6-inch multimedia display, greater connectivity and an expansion of the EyeSight active technology suite.