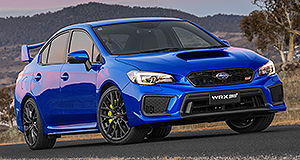 SUBARU Australia has revealed the next generation of its legendary WRX sportscar will be in local showrooms before the end of 2021, with the all-paw performance icon set to return with company.

Speaking to Australian media at the virtual launch of the new sixth-generation Outback SUV, Subaru Australia general manager dropped the bombshell during his 2021 outlook address, commenting proudly on how well the existing WRX and BRZ had done sales-wise so deep into their lifecycles.

“The really great news is we get the next generation of these halo cars later in 2021,” he said.

“It’ll be worth the wait and we’ve got a couple of tricks up the sleeve … we’re really looking forward to sharing more on both of those with you soon.”

While stopping short of confirming any concrete details other than its new ‘Subaru Global Platform’ underpinnings, Mr Read said all of the brand’s core DNA – boxer engine and symmetrical all-wheel-drive – would be present in the new WRX which was not expected to arrive until early next year.

Regardless, Subaru fanatics can expect the classic forced-induction, all-paw boxer recipe to be continued with the familiar choice of a six-speed manual or continuously variable transmission.

Details are still thin on the ground, however firepower is expected to come courtesy of a turbocharged version of the new BRZ’s 2.4-litre engine with overseas reports suggesting a peak power output of around 215kW.

“We are really excited internally from what we’re hearing from the factory so far.”

Just as thunder follows lightening, the emergence of a new WRX inevitably points to the eventual debut of a new flagship STI version, the release of which in this case has been earmarked for 2022.

Neither Mr Read, Mr Rowley or senior product manager Goran Popov would be drawn into revealing any information regarding the new STI other than the fact it would follow “slightly behind the WRX” with more details still being fed through from the factory.

Given the STI’s famous reputation for being the pinnacle of Subaru performance and always elevating the WRX’s capabilities to a new level, it would be safe to assume the new model will develop a fair bit more power than the current version’s 221kW/407Nm.

Some reports out of Japan have even gone so far as to suggest the new STI will be aimed squarely at the Mercedes-Benz A45 S and Audi RS3 hyper-hatches and produce close to 300kW from a heavily reworked version of the force-fed 2.4-litre mill earmarked for the WRX.

Regardless of final outputs, the brand is confident its new-generation “halos” – including the BRZ – will reignite some of the passion for the brand that fans may have lost in recent years with the axing of the cult-favourite Forester and Liberty GTs as well as the emergence of increasingly capable hot hatches.

“WRX, BRZ and STI are the massive opportunity; if it (passion) has extinguished for some people, it will reignite with these models,” Mr Rowley said.

“We’re conscious of that, we want to deliver it, the factory does too.

“The factory is well aware of the loyalty, the level of interest, the love for those products and the brand in our market.”

Subaru Australia sold 98 examples of the current-gen WRX and STI last month, down 17.3 per cent on the 98 units it shifted over the same month last year.