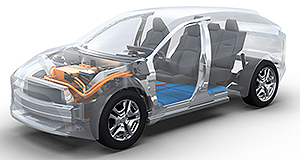 JUST two days after GoAuto discovered and reported on a mystery trademark application filed by Subaru for the ‘Solterra’ nameplate, the Japanese brand has confirmed its upcoming electric vehicle will brandish the name when it goes on sale in Japan, North America, Europe and China mid-next year.

Despite the mechanically related Toyota bZ4X being earmarked for an Aussie launch at around the same time next year, Subaru Australia has confirmed the factory has no concrete timeline for the Solterra in regard to our market.

The possibility of a local introduction has not been ruled out entirely however with national corporate affairs and public relations manager David Rowley revealing there was already ongoing dialogue between Subaru Australia and the factory about the prospect.

With no current plans to expand its hybrid line-up beyond the XV and Forester, the Solterra is still in poll position to be the next electrified Subaru to materialise here despite the lack of a launch confirmation.

Given the Toyota’s rough launch time, we would not expect the Solterra to lag too far behind its rebadged twin so not to miss out on vital sales.

When asked if Subaru Australia thought the Australian market as ready for EVs, Mr Rowley said there was clearly a “small but significant trend developing” among new car buyers with the amount of EVs being sold growing almost monthly.

Confirmed to be an electric mid-sized SUV, very little is known about the Solterra with neither Subaru or Toyota revealing much so far about their respective – co-developed – EVs other than that the ‘e-Subaru Global Platform’ and ‘e-TNGA’ platforms are modular in nature and will be adapted for future uses beyond the inaugural models.

In Toyota’s case, seven dedicated ‘bZ’ models, including the bZ4X, are expected to be launched between now and 2025 with another eight set to ride on alternative platforms.

Subaru meanwhile is keeping its cards much closer to its chest, revealing no details at all of its future electric plans however it would make sense for other models to emerge using the same platform at some stage or another in coming years.

The brand’s local arm has sold 13,525 new vehicles so far this year ending April to be up 47.7 per cent year-on-year with the Forester once again proving the most popular model (5006).