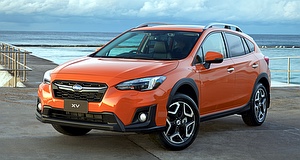 SUBARU Australia this week celebrated a significant milestone for its XV, when its smallest SUV, which first arrived in local showrooms in 2012, passed the 100,000-unit sales mark.

As Subaru’s premier entrant in the Compact SUV class, the XV was also the Shibuya-based brand’s first model to offer idle-stop technology.

The original GP-series XV – sold as the Crosstrek in some markets – rode on the same underpinnings as the Impreza small car and featured standard symmetrical all-wheel drive and a 2.0-litre petrol engine mated to a choice of manual or Lineartronic automatic continuously variable transmission (CVT).

Subaru updated the XV significantly in 2017 when the second-generation model range was launched in Australia. The GT-series range was the second to sprout from the Tokyo-based company’s acclaimed Subaru Global Platform (behind the GK/GT Impreza), and introduced qualities such as improved ground clearance (220mm), Apple CarPlay and Android Auto compatibility and LED headlights to the line-up.

In 2020, the range was joined by a pair of petrol-electric hybrid variants which became some of the most fuel-efficient vehicles in their segment. The mild-hybrid versions offered a claimed 14 per cent improvement in fuel economy in the urban cycle and seven per cent improvement in the combined cycle over their petrol-powered siblings.

Since 2020, Subaru has offered its X-Mode traction control system (replete with Snow/Dirt and Deep Snow/Mud driver selectable options) in the XV range,. Adaptive cruise control and lane centring assistants were also made available, while the midlife update further introduced SI-Drive across the XV range, which gave drivers more performance options.

Subaru Australia managing director, Blair Read, says that although a decade has passed since the XV was first launched Down Under, it has evolved cosmetically and technologically to remain true to its fundamental purpose.

“The success of XV has been its ability to offer consumers a compact SUV that provides on-road and off-road capabilities, catering for city-living and off-the-beaten-track getaways,” said Mr Read.

“The XV sits in that sweet spot between the small and medium SUV category and provides an impressive package at an affordable price.

“100,000 XV sales is a major milestone for the Australian retailer network, and we are delighted that the XV continues to meet Australian consumer’s needs.”