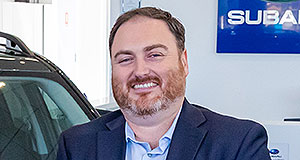 INDEPENDENT motor vehicle distributor and retail and logistics specialist Inchcape Australia has restructured its senior management team with the promotion of current Subaru chief Colin Christie as managing director of the overall business.

The move places Mr Christie as overseer of Subaru in both Australia and New Zealand, PSA Group brands Peugeot and Citroen in Australia as well as the group’s automotive retail and the AutoNexus logistics operations.

Kate Gillis, who was previously general manager of marketing for Peugeot Citroen Australia (PCA), also now becomes a member of the Inchcape Australia executive team with her promotion to the newly created role of PCA general manager.

This, in turn, sees the departure of Ben Farlow, who took on the role of acting managing director of PCA when Anouk Poelmann stepped down in September 2018.

Mr Farlow had also maintained responsibility as marketing director of Inchcape Australasia over this period.

The latest round of management changes follows the restructure of Inchcape’s business in this region earlier this year, which saw the retirement of Inchcape Australasia CEO Nick Senior on April 1 and the formation of a new division – APAC – which consolidated the Australasia and Asia businesses with George Ashford at the helm.

Mr Christie is a 24-year Inchcape veteran who took over as managing director of Subaru Australia from Mr Senior in October 2016.

A qualified accountant, Mr Christie also moved through a variety of other senior positions at Inchcape over almost two decades, including company accountant for the Volkswagen brand, finance manager for Inchcape Retail, business development manager for the Inchcape Group and commercial manager at AutoNexus.

His first Subaru appointment came in 2008 as general manager of finance and operations, a position that included serving as a company director.

Mr Dinsdale is a highly experienced finance executive and another Inchcape stalwart, having worked across various operational and finance roles over the past 10 years.

He has spent the past four years as finance director, moving into the position after two-and-a-half years as general manager of finance and operations for Subaru.

He also had a stint as Inchcape’s general manager of finance and systems, and group financial controller, joining the company in November 2010 after five-and-a-half years as group finance manager for Hagemeyer Brands Australia.

She has considerable experience with global consumer brands, most notably some 17 years with Waterford Wedgwood where she rose to marketing director for Europe, the Middle East and Africa (EMEA).

Earlier in her career, she held a variety of sales, marketing and communications roles in automotive retail, including a three-year stint with Inchcape’s retail arm.

“These latest changes enable us to reshape and redesign our broader business as we move into a new era,” Mr Christie said.

“We will be able to leverage our scale, capability and alignment across distribution, logistics and retail to achieve fantastic outcomes for our people and customers alike.”

Mr Ashford also acknowledged the role played by Mr Farlow, noting that he had made “a very significant contribution to the development of our marketing and digital capabilities during his tenure”.

“I would like to take the opportunity to thank Ben for his achievements,” he said.

“He leaves a very positive legacy at Inchcape having developed people, capability and delivered great outcomes. We wish him every success in the future.”

Mr Farlow had spent almost three years at Inchcape, moving into automotive after building up a wealth of experience in other sectors across Europe, Asia and Australia, including two years in London as global vice-president and general manager of portfolio brands at the Bacardi Martini Group.

This came after more than a decade working in Australia and overseas for global beverage alcohol giant Diageo, where he moved through various general management, marketing and sales roles.